Lessons from the Playground for the Hybrid Workplace

Not long ago I was with my 7-year old daughter at a playground.  Also at the playground were a brother (7) and sister (6).  The kids quickly started interacting with each other, and soon they were actively playing together.  The two 7-year olds used their imagination to cook up a game that involved pretending they were in a distant kingdom fighting dragons and dodging hot lava, etc.

The two older kids were fully engaged playing the game when after a while the younger girl said with a crestfallen look, “I don’t want to play with you guys anymore.  I’m never involved.”  When I heard these words, I felt a jolt of sadness come over me. I also had an insight related to the challenges in many Diversity & Inclusion programs.

D&I programs work hard to ensure that diverse people are represented in the organization and included on teams.  But it’s up to the teams collectively to help each member feels truly involved; involved in the nitty-gritty challenges, involved in the moments of fun and play, and involved in the overall social fabric of the team.

I guess that’s where the “Belonging” in DEIB comes to life. You can be on the playground, ostensibly playing the same game as the rest of the team, but if you don’t really feel “involved” then you will not have a sense of belonging.  As a result, you will feel like that 6-year old girl did: sad, disappointed, and disengaged.

Considering the story above, what can you as a team leader and team member do to make sure everyone on your team feels like they are truly involved in the team’s work?  For one thing, you can invite everyone to have a say in developing the “rules of the game” (group norms).  Next, you can check in with people and ask open questions like: “What’s it like for you to be a member of this team?” and “What aspect of being on this team keeps you from participating fully?”

In today’s hybrid workplace, it’s up to team leaders and team members alike to keep an eye on each other to make sure that no one “falls through the cracks.” Some people like to be checked on more often than others, so it’s important to inquire about the unique preferences of each individual.  Once you know another’s preferences, you can adapt your leadership/membership style to be optimally responsive to another’s needs.

The modern workplace is demanding and stressful, but it can also be inspiring and uplifting. Are you doing your part to make sure each member of your team feels involved and included in both the ups and the downs of organizational life?

Conscient Strategies is seeking a leadership and performance coach to join our team and support our federal clients. This position requires...

END_OF_DOCUMENT_TOKEN_TO_BE_REPLACED 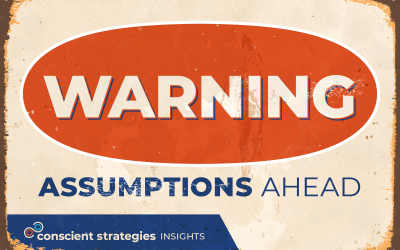 END_OF_DOCUMENT_TOKEN_TO_BE_REPLACED

Conscient Strategies is seeking an energetic and self-motivated Consultant interested in joining our growing team. We are seeking help from an...